KOA FUTURES: Hawaii Peace & Justice
Since 1971, the people of Hawaiʻi have opposed the Rim of the Pacific Exercises and produced protest banners to hang from overpasses and buildings to demand and end to RIMPAC.  Below you will see a few contemporary examplesThe movement first began with the Protect Kahoʻolawe ʻOhana and continued with the Nuclear Free and Independent Pacific.  The next wave of anti-war, demilitarization activists in Hawaiʻi are continuing toward building a world without war and generative economies that protects the ʻāina and our moana., a world of genuine security.

​The Hoʻopae Pono Peace Project seeks to build strength in the Hawaiian community, and in its connections with others, through culture-based support for the prevention and resolution of family and community issues, support for youth as nonviolent warriors, and promotion of nonviolent solution-building and activism.
ROLDY
These are portraits of myself and my relationship to the waters of the islands of Guahan, making a paper net to hold me as I remember. My dad used to be a fisherman, bringing me and my brother along with him on the reefs. Walking along spikey limestone rocks, seeing colorful algae and sea grass as we wade through pools…these are just some of the things that I will always treasure, especially living away from the islands now. The title of these images is “Talaya 3000”. Talaya means fish in Chamoru. Our waters are so important. They are a place where knowledge is shared and grown, where history is passed down. And it is my hope that our waters will always be free, open and protected, so other fathers and parents would be able to make memories for their children in the future, to continue to connect them to the lands and waters that have always been there for us, forever.

WOMEN'S VOICES WOMEN SPEAK (Anahulu at the Koʻa Cancel RIMPAC artivism event,  July 7, 2022)
​
Womenʻs Voices Women Speak is a multiethnic collective of women in Hawaiʻi who address local and international issues relating to demilitarization, peace and non-violence. They work to foster womenʻs political leadership to educate the public on the gendered and environmental harms of militarization,  as well as uplift examples of alternatives to military dependence. Read their statement: No to RIMPAC 2022; Yes to Aloha ‘Āina and Genuine Security 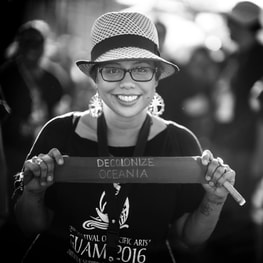 MONAEKA "NAEK" FLORES
​Monaeka "Naek" Flores (she/they) is a queer CHamoru artist and activist from Guåhan.  Naek is a core member of Prutehi Liteyan: Save Ritidian and Independent Guåhan. I was inspired by the powerful collective poem and video produced by the Cancel RIMPAC coalition in 2000, “In A World Without RIMPAC.” Like the poem, these images are meditations on a world without militarization and colonization. I reflected on true embodiments of freedom, the protection of all that is sacred, and the profound relationships cultivated over millennia with the ocean and each other.
A pehea ihola hoi i nalowale ai na Bipi nei o Ewa?  (and how did the oysters of Ewa disappear?) digital images (2022)
This painting draws its inspiration from a story about how love can save the world.
The story goes that in the old days in the land now known as Guam, when the people lost their connection to their ways, the rains would not come and the people grew wild with hunger, a giant fish determined to destroy the island began to eat the island, one giant bite after another.  The women offered their help but the men rejected the women’s offer.  Day after day the men tried to stop it but couldn’t.  One night, the answer came to the maga’haga elder and leader of the women.    The women would weave a giant net from their long black hair.  One by one they came, weaving and chanting through the night, imbued with deep spiritual belief to make the net unbreakable.  By the morning they set the net trap that caught the monster fish but the women couldn’t haul the monster fish in so they asked the men for their help.  Together they helped them haul the monster fish.  The painting is a rendering of the power of ordinary people and in particular women in resisting extraordinary powers in this case the military industrial complex depicted by the giant metallic octopus.  The military has long been studying biomimicry of marine animals to weaponize natures powers for naval defense purposes.  The octopus is one such creature the military has been studying for its translucent properties to hide from the enemy.

RIMPAC, is one such industrial complex on the ocean. It’s sheer scale, size, and power seem an impossible powerful structure to overturn.  Yet stories like these offer us lessons.  Each strand of hair on its own is not strong enough to catch the monster yet woven together imbued with chants and prayers of love and hope they can transform a single strand of hair into a protective net.  The women knew they couldn’t do this alone so asked the men to help them.  Together they demonstrate people’s abilities to overturn the most powerful monsters of this world.

Connect together. Care for yourself and others. Don't be a murderer.
​Stop the militarisation of Oceania. Stop RIMPAC!

"ALLIES DON'T DESECRATE PARTNERS" by KALANI REYES
We can become accustomed to anything, even to dinosaurs appearing in our daily lives. In the peace movement in Gangjeong Village, I have become accustomed to many strange new routines: bowing one hundred times to pray for peace outside the gates of the Jeju Naval Base, leading teams of kayakers over the waterfall from Gangjeong River into the ocean, singing, dancing and marching with flags in the middle of the street… Just as dinosaurs have a fantastic and enchanting power which enraptures the child in each of us, the power of creative nonviolence invites us to transform what we take for granted and imagine new possibilities. Maybe that is why I dreamed on Mar. 20, 2017 of dinosaurs swimming into the harbor of the Jeju Naval Base and happily munching away on the giant copy machines that floated there in the place of warships. We have become too comfortable and desensitized to seeing warships and military bases in our daily life and we forget to pay attention to the spectacular corals and crabs, chitons and sea stars, fishes and toads, sea snails and anemones which encircle our coasts. Both Jeju and Hawaii are geologically too young to have dinosaur fossils, but the volcanic islands are filled with the ancient power of nature and ripe with youthful, creative potential to extricate us from the war machine.
​
(Because of the US Navyʻs occupation of Korea, it is a member country of the RIMPAC exercises. The US presence in Korea has had devastating impacts on the Korean peninsula and the inability for North & South Korea to unify).
Proudly powered by Weebly
Photo used under Creative Commons from CDay DaytimeStudios w /1.9 Million views